TGIF! It’s Friday AND a snow day. Could the day have started off any better for the kids? Ditto for the dog who almost danced a jig upon seeing the white stuff when we went out for our walk.

An outing which is thankfully over.

Now, safely and injure-free back at the homestead, instead of blogging, I should be working on move preparation.

The air shipment arrived finally. It was supposed to have been delivered to our temp apartment by the 14th latest. Turns out someone forgot to ship it! And then, of course, when the shipment did finally arrive, customs clearance took twice as long as originally estimated.

Which means that, given that we will move into our permanent location in a week (fingers crossed), there is no need to bring the 19 boxes of air shipment here just to turn around and haul them to another location in a week, on top of all the other hauling that will be going on when our boat shipment arrives.

Which means that the snow boots I really could have used on today’s walk with the dog are in one place while I am in another.

Same with the mittens.

Which means that instead of going on a leisurely walk with the dog this morning, we went for a not-so-leisurely jog, motivated by cold hands and even colder feet.

Now, it’s challenging enough walking the dog here, what with navigating hills, cars, and pedestrians. Add in a couple of inches of snow and our normal route is an obstacle course.  No salt; no sand; warm-weather, tractionless sidewalks that are perilously slick with just a hint of condensation; and a dog, so happy to be back in her snowy element (BRTs were made for winter), she was galloping full-tilt, jerking me along behind her, a treacherous ride that I punctuated with some, ahem, words of concern as I tried to avoid having anything but my feet make contact with terra firma. Not an easy task.

Somehow, we made it down to the sea unscathed, Zoya’s gait finally a bit more subdued,  my shrieks of fright and uttered expletives apparently having finally penetrated her brain. Here is what we saw: 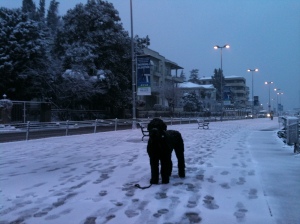 Lovely jog along the sea, no excitement, pretty much had the place to ourselves minus one other woman and her dog (who avidly avoided Zoya, put off by her initial friendly trouncing of him at their first introduction a few days ago; he didn’t share her enthusiasm at meeting another on-leash dog). Of course, who else would be out on a day such as this except a dog owner?

On our way back up the hill to the apartment, jackpot: a stick! We both pounced on it as if it were gold. Zoya got to it first, so I let her carry it. (I was going to give it to her anyway; the dog likes sticks and has been foraging every mounds of grass and bushes so desperately for something woody to sink her teeth into, I was on the brink of buying her a small tree.)

Something about sticks really trigger the terrier in her; she gets one and then has a one-track mind to head home. And a stubborn inclination to walk in front of me when she has a stick in her mouth. This is a habit I normally discourage (I watch Cesar Millan, after all) but, hey, we were walking up what was practically a mountain, and I needed to take advantage of whatever help I could get.

So, we walked up the hill resembling some caricature of a horse and carriage, Zoya in front with stick in mouth like a bit, the leash like a reign, and me, the carriage-less rider trailing behind her. Granted, I am sure we looked a bit strange (confirmed by the pointing of fingers and giggles we elicited from the few fellow pedestrians brave enough to be on the hill’s snowy paths). Still, I was quite insulted when a man stopped me to ask WHAT KIND OF ANIMAL ZOYA WAS? Puh-leeeeese. What else could this be?

I blame it entirely on the snow and wind in his eyes.

Here are a couple of more pics: 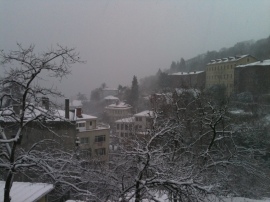 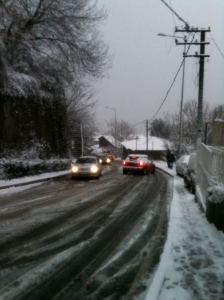 Note the cars in the picture to the right. Just a sampling of the cars fender-to-bumper that were stuck on the hill going up (the pictures really do not do this hill justice). (Oh, and by the way, judging by one van’s experience, chains on tires do not always do the trick.)