Even for as oblivious person as I am, there is one thing that you notice very early on here: the evil eye amulets, or, as they are known in Turkish, nazar boncuğu. 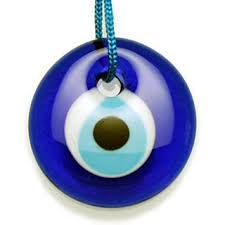 The evil eye is believed to cause problems for a person, the evil look cast generally by someone who is envious of you. The amulet protects one from the evil eye, intentional or unintentional (apparently, a person can cast an ‘evil eye’ on another without meaning to, just by coveting what the other has; I guess this means that we are all guilty of having sent off a teensy one or two evil eyes in our lives…probably the reason why there seems to be a great density of these in the yards of some of the gorgeous homes that line the boardwalk here).

The amulets can be found everywhere here. They literally grow on trees. Okay, almost though. (We saw this in Cappadocia…our guide gifted us with two…according to him, the amulet works best when you receive it from someone as a gift or something earned…mine is on my key ring to keep people from envying my beautiful little silver Toyota Corolla, a much more coveted car than the Mercedes and BMWs that abound, surely).

So, the amulets are always the same design but can be found in all different shapes and forms: from the miniscule to the humongous; on key rings, jewelry, clothing, ceramics, etc. I have noticed most of them hanging from people’s rearview mirrors or the fronts of houses.

My favorite, though, was where I found the nazar recently while strolling the surrounding area:

Now, that is effective.