Tuesday I finally made it to the Princes’ Islands.

Well, one island at least: Büyükada (Great Island). Given that we will have lived here two years come January, this is pretty pathetic. My only defense is that we are gone most of the summer, the ideal time to visit the islands.

Because Tuesday was October 22nd and, therefore, definitely not summer. However, the sun was shining brightly in the sky, the flowers were still blooming on the island, and the sea sparkled a cerulean blue.

(Case in point: Normal residents – i.e. full-time residents – number 15,000. During the summer, the figure can go up to 100,000 or so.  This was not always the case of course. Previously sleepy fishing villages for the most part, the implementation of ferry transport to the islands in 1846 made the Adalar – the islands – accessible to all.)

So, apparently, instead of being a cultural procrastinator, it turns out I was smart and insightful by going in the fall.

Too bad that I can’t take credit for it.

The photo group, again, was responsible. Our guides, Nancy and Annette, crafted a rich and rewarding day full of new sights, experiences, and photo opportunities to boot.

Unfortunately, not dissimilar to my experience with the food in Tuscany, I was so busy enjoying the local flavor and the company of my interesting, enthusiastic, and charming companions, I have few photos to share (and, even then, not exactly great ones).

(And, yes, I remembered the camera this time.)

The islands – nine in total – are located in the Sea of Marmara, approximately 20 km southeast of Istanbul. You can reach them in a couple of hours or less, depending on which ferry you catch from Kabatas. We caught the 8:40AM ferry from Kabatas and landed in Büyükada past 10AM (although the evening ferry, with its solo stop, had us back on the mainland in just over an hour).

A charming, bustling harbour town met us: fish restaurants; ice cream and waffle shops displaying their creamy, colorful, and sweet-smelling wares; and stores full of Turkish memorabilia spread out before us, as did a mix of architectural styles, including lovely old, Ottoman style buildings.

No cars are allowed. It is a wonderful respite not to have to dodge cars, something one starts to do habitually when living in Istanbul. 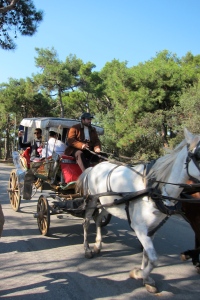 Of course, you have to watch out for the horse wagons…

…and the bikes, both of which are plentiful. 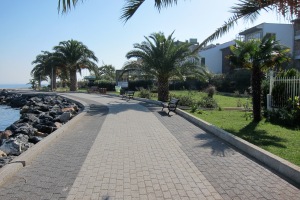 We meandered along the walkway bordering the sea and then slowly wound our way up to the square where it seemed like hundreds of horses were waiting patiently for customers (they, their wagons and their less patient drivers).

Seeing the number of hooves pounding the pavement on an autumn day, it made me wonder if perhaps cars were the safer obstacles to dodge come summertime.

The queue (similarly styled as what you find at Six Flags or Disney World, with mazelike waiting rows) was thankfully short, and we were headed up to the top of the island, passing beautiful villas – many Ottoman-styled – along the way.

The horses only took us part of the way up the “hill” (“mountain” in my book). The remainder of the climb had to be done with sure foot and strong heart. Not because the path was treacherous, but because it was made of bumpy cobblestones and quite steep. Some visitors – not us – opted to ride bikes up the hill…although, come to think of it, I never actually saw someone pedaling up the hill. Others found different means of getting to the top… 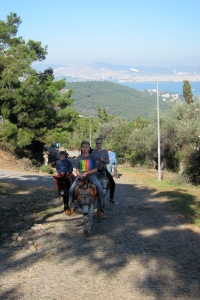 At the top of the hill, we found the Greek monastery of St George, with its many icons and colorful interior paintings. 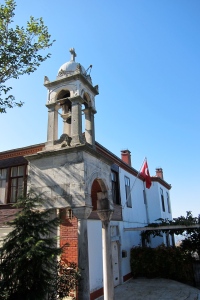 Before we reached the summit, we saw the following on the trees: 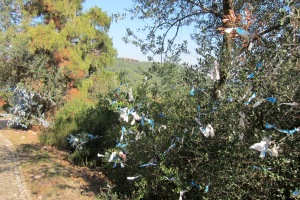 It turns out that these small pieces of material tied to the branches represent a prayer, the most common prayer being one said by a mother for her child.

After touring the monastery, we went to the nearby restaurant for some much-needed refueling (of course). The food was almost as good as the views. It was like being on the top of the world with fields of blue below us. In the distance, we could see the bustling Asian side of Istanbul, however, it felt very far away.

After lunch, we enjoyed the benefits of gravity as we made our way back to the center of town. Despite the gravitational assistance, an ice cream was in order once we reached town. We headed for the one selling Italian gelato (pistachio and honey almond for me; almost as good as the one I had in Siena. Almost.) 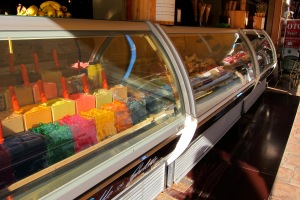 (The picture doesn’t do the ice cream – or the array of toppings they have for the homemade waffles they make – justice.)

We finished our gelato just in time to catch the ferry home and watch the large red sun slip below the horizon.

After this fine taste of the Adalar, I will definitely drag the mushrooms (i.e. our kids) out of their caves for an island excursion. I can almost hear now their cries of joy when we rent bikes and make our way to the top of the “hill.”